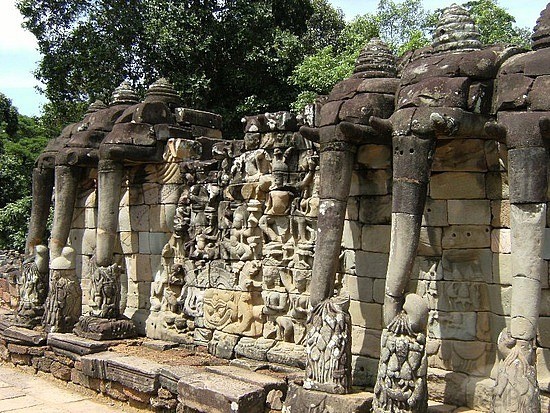 They face the parade grounds where processions, parades and other events were held. The King would watch the events standing on the Elephant terrace, which he also used as an audience hall to listen to the complaints and problems of the citizens of Angkor.

Both terraces contain extensive sculptings of Devatas, Apsaras, mythological animals and demons. The Elephants terrace and the Leper King terrace were restored during the 1990’s and 2000’s by the EFEO.

The Terrace of the Elephants
The Elephants terrace was built by King Jayavarman VII at the end of the 12th century. The terrace stretches out over a length of more than 300 meters from the Baphuon in the South to the Leper King terrace to the North. The terrace is named for the sculptures in high relief of elephants and their mahouts. At several sections large elephant heads protrude out from the wall, their very long trunks forming pillars extending to the ground, similar to those of the gates of Angkor Thom.

The terrace was used as an audience hall and for public ceremonies. According to the accounts of Chinese diplomat Zhou Daguan the King appeared daily on the Elephants terrace to listen to the complaints and problems of the citizens of his Kingdom. The parade grounds in front of the terrace were used as the scene for several festivals, games, processions and parades of the Khmer army watched by the King from the Elephants terrace.

The Elephants terrace consists of inner and outer sections. The inner sections were built first and later became buried under the soil during construction of the outer sections. The well preserved inner walls contain numerous carvings of Apsaras, warriors and animals like multi headed horses. The Northern end of the outside walls contains carvings of sports, such as Polo games, wrestlers and chariot racing. The Central section of the terrace contains carvings of Garudas, Kinnarees and elephants engaged in a hunt, as well as depictions of the Buddha.

The Terrace of the Leper King
The Leper King terrace is named after the “Leper King” statue that was found here. The terrace was built by Jayavarman VII in the late 12th century, directly North of the Elephants terrace.

The Leper King terrace is believed to be built as a representation of Mount Meru, the center of the universe in Buddhist and Hindu cosmology. The 25 meter long terrace is completely covered with sculptings in high relief. Long rows of seated finely carved figures, mainly of multi headed Naga snakes, armed guardians, Garudas and female celestial beings decorate the walls.

The “Leper King” statue was found on top of the terrace. According to local belief, the statue was a depiction of King Yasovarman I, who was also known as the Leper King as he suffered from leprosy. It is now assumed that the statue might represent Yama, the God of death. The statue now sitting atop the Leper King terrace is a copy, the original is kept in a museum in Pnomh Penh. It is surrounded by three guardian figures armed with a club.