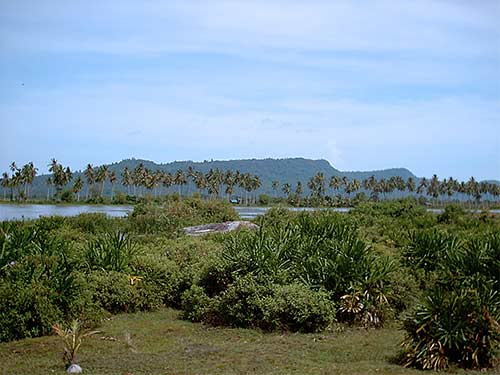 Ream National Park: was declared a protected area in 1993 by royal decree because of its national, scientific, educational and recreational values. It’s situated approximately 18km east of Sihanoukville.

Most of the mangroves, wildlife and beaches are in pristine condition, with landscapes for everyone: mangrove forests, a mountainside waterfall and miles of beaches unmarked by footprints. Nearly 200 bird species live within the park, including herons and cranes. King cobras and pythons have been spotted too, so be vigilant on hiking trails! 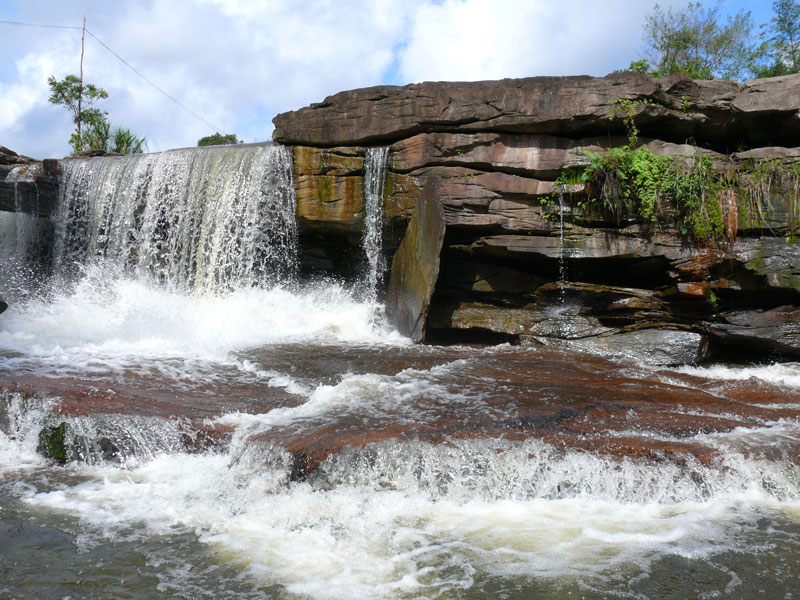 Kbal Chhay Waterfall: approximately 16km from downtown Sihanoukville on national road 4, gives visitors a little taste of paradise. The 14m high waterfalls were discovered in 1960 and developed into a source of fresh water for Sihanoukville in 1998. It has definitely emerged as a favorite among local and foreign visitors. 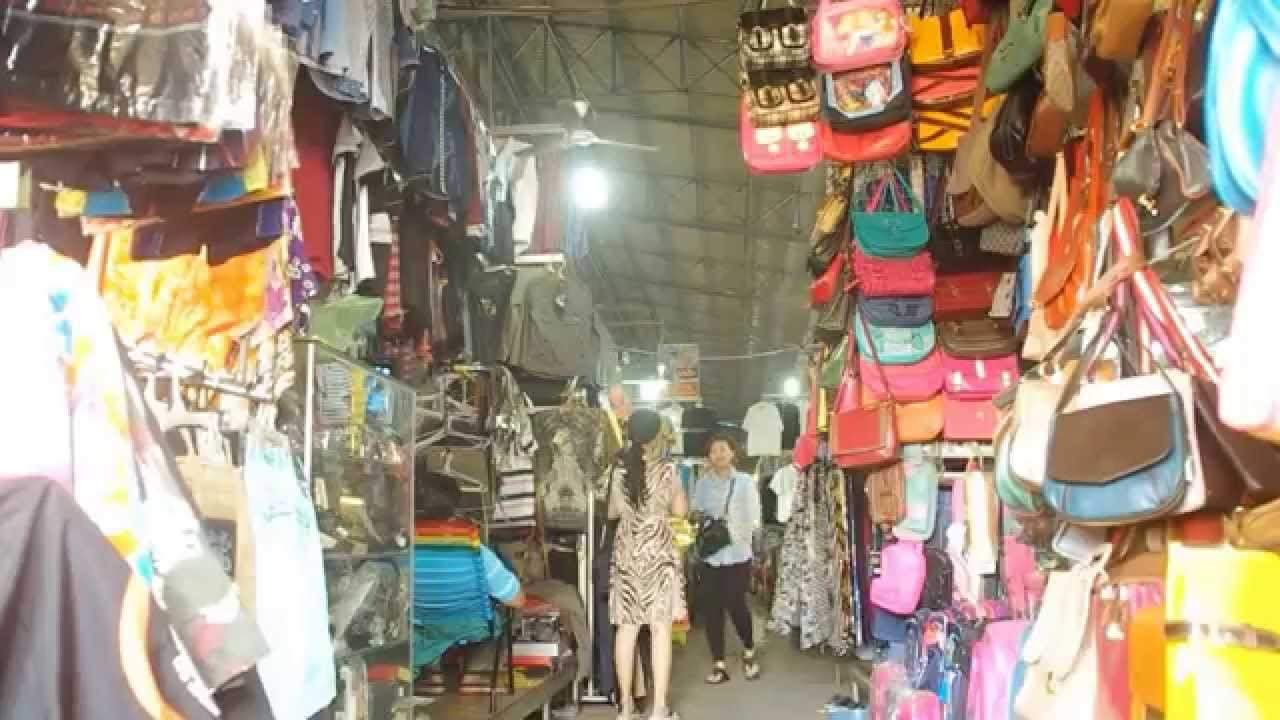 Wat Leu: was constructed in 1964 and is located at the top of Sihanoukville mountain. The paintings in the wat depict the life of Buddha. Wat Leu is an ancient Buddhist wat that is worth visiting for its religious significance and breath-taking mountain views. 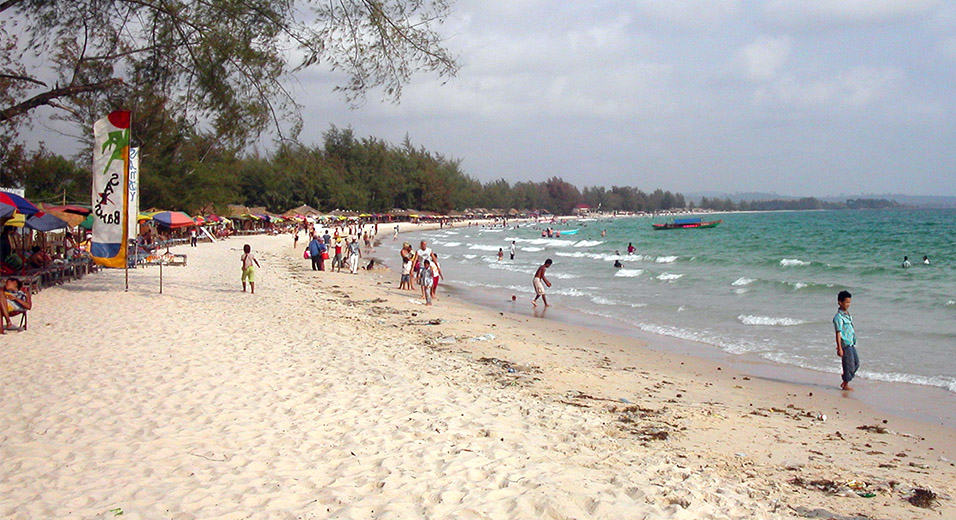 Ochheuteal Beach: is the most active beach in Sihanoukville and very popular with travelers and weekenders alike. Thatch-roofed seafood shacks and beach bars line the sand from one end of Ochheuteal to the other. Next to it is “Serendipity beach” which is especially popular with budget travelers.

Much of the beach is dedicated to food stalls and small bamboo bars, but the southern stretch is largely deserted. While Serendipity has some of the cooler beach shacks, the restaurants and bars stretch for much more of the full length of the beach, with the far end playing host to the on-again off-again joints that offer free accommodation in the low season (you’re expected to either eat and drink at the place frequently or help them distribute flyers in return).

The seas can get rough here and drownings are not uncommon, so exercise care when swimming — the waves may not look big, but the currents are deceptive. And, without wanting to sound too much like your mother, swimming when under the influence (of whatever) isn’t a particularly intelligent thing to do.

Ochheuteal also has more than its fair share of con-men, dodgy moto drivers and other lowlife, so exercise care at night. Staggering down the beach in the early hours of the morning stoned or drunk is not recommended. Rapes, stabbings and muggings have all been reported here, both at the rocky end near Serendipity, but also along the other end of the beach. Take care. 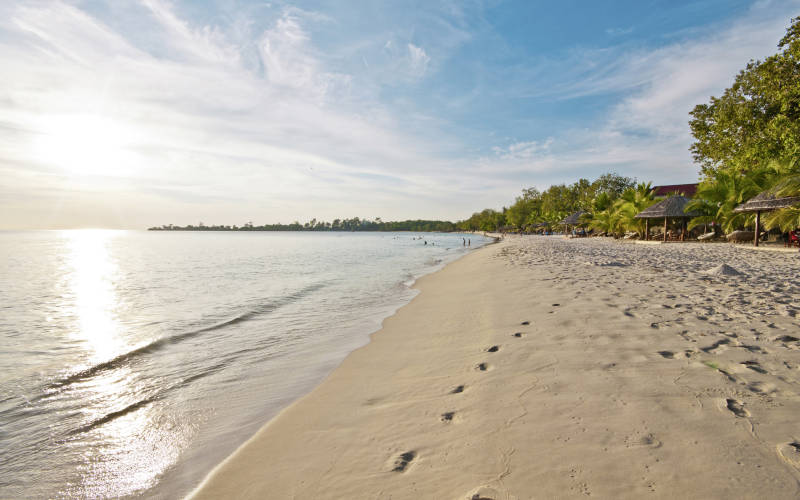 Sokha Beach: In the opposite direction from Otres on the other side of Ochheuteal is a radiant stretch of almost white sand and clear shallow waters: Sokha Beach wins our vote for the most eye-pleasing and relaxing beach in Sihanoukville.

The beach is backed by the huge Sokha Beach Resort, the first — though no doubt, not the last — truly flash hotel to plunk down in Sihanoukville. Although it’s a shame to see one resort dominate the sand, at least they look after it well: the beach is near-always clean and the water sparkling. There is a very shallow drop off here, so you can wander a long way out into the water before it gets deep, making it ideal for those with young children.

Serendipity Beach: is the well-visited beach where you can find cheap guesthouses alongside eateries, shops, and bars. This stretch of beach never sleeps and is a favorite among foreign tourists.

Otres Beach: Further to the south, over the headland, you’ll find the rather tempting Otres Beach — the better, if lesser known, of Sihanoukville’s beaches with its whitish sand and calm tides. Fewer beggars and children are around selling bracelets and the beach has a far more relaxed vibe than Ochheuteal beach.

Thanks to low-rise zoning restrictions and some creative architecture, Otres Beach enjoys a chilled out vibe — for now, anyway — so chilled out that in low season Otres Beach is even quieter than the rest of Sihanoukville and many places do close up shop. With so few people, so much sand and the sprawling sea, this could be the deserted island you’ve been searching for … and you don’t even have to leave the mainland — fancy that.

Hawaii Beach: is peppered by thatched roofed eateries and cafés and has always been quite popular.

Islands: Approximately 34 islands lie within the jurisdiction of Preah Sihanouk Province. These include the larger islands of Koh Rong and Koh Rong Samloem to the west, the islands inside Ream national park Koh Thmei and Koh Ses, and also a number of smaller islands found both close to shore and offshore, stretching as far north as the northern tip of Kampong Som Bay. Many of the islands have small beaches and some have been identified as good for snorkeling. These include Koh Khteah, Koh Chraloh, Koh Ta Kiev and Koh Chraloh. The island of Koh Tang, Koh Prins and Poulo Wai have good environments for diving. Most of islands are accessible by regular boat trips.