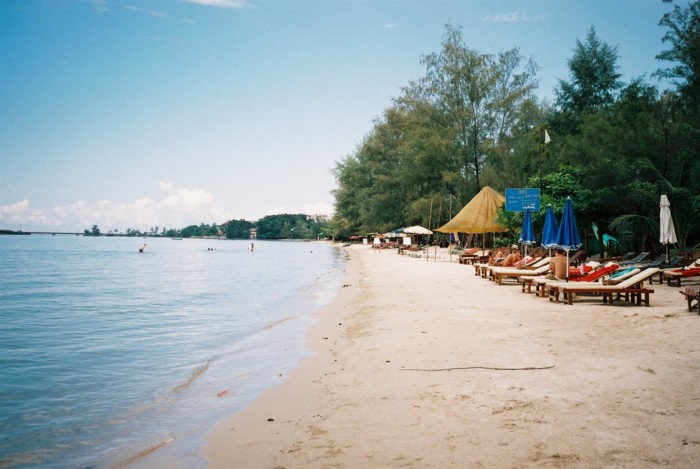 Sihanoukville is a province in southwest Cambodia known for its beaches, tropical islands and the mangrove jungles of Ream National Park. Set around a deep-water port on a peninsula jutting into the Gulf of Thailand, the provincial capital of Sihanoukville is lined with palm-fringed beaches, seafood restaurants and late-night bars. Overlooking the capital is the hilltop Buddhist temple of Wat Leu.

Sure, Sihanoukville would never win first prize in a pretty-town competition but thanks to a surrounding coastline of white-sand beaches this is Cambodia’s most happening sun-sloth destination. Named in honour of the then head-of-state, Sihanoukville (Kong Preah Sihanouk; also known as Kampong Som) was hacked out of the jungle in the late 1950s to create Cambodia’s first and only deep-water port, strategically vital because it meant that the country’s international trade no longer had to pass through Vietnam’s Mekong Delta.

Today it is a bustling and ever expanding city, but its sandy bits are one step removed from the hubbub. The Serendipity Beach area is a sort of decompression chamber for backpackers, who flock here to rest up between travels and party through the night.
Even further away from the hustle, in the far south of town, is relaxed Otres Beach, where cheap bungalow joints and bohemian-flavoured guesthouses are now neighbours with rather swish boutique resorts. The mellow scene here ticks all the boxes if you’re looking for lazy days of sunbathing rather than night-time bar-hopping.

Although none of Sihanoukville’s beaches qualify as Southeast Asia’s finest, the sandy strips rimmed by casuarina trees and coconut palms have plenty of tropical charm and it’s easy to find stretches of sand to yourself, especially if you venture outside the centre. If they’re not picture-postcard-perfect enough for you, Sihanoukville is also the jumping-off point to Cambodia’s southern islands, where castaway-cool beckons.