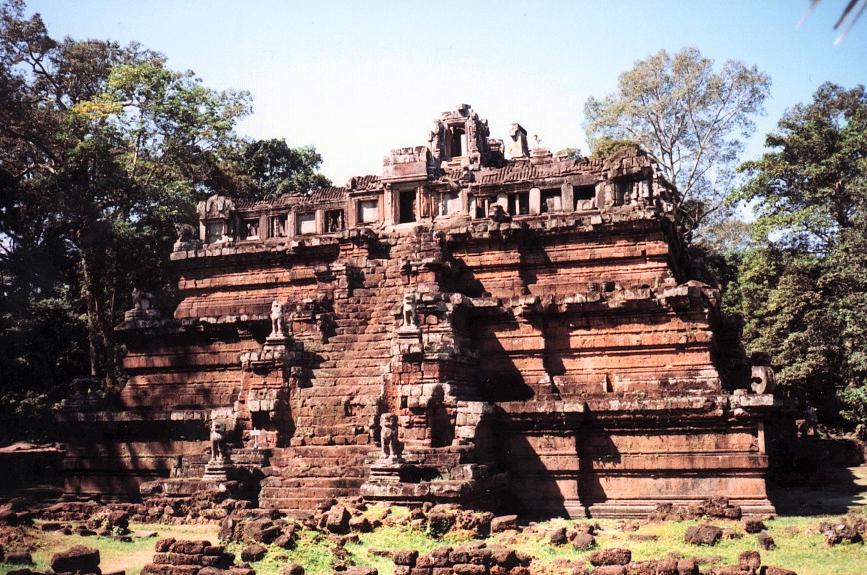 The Royal Palace was built by King Jayavarman VII in the city of Angkor Thom, the new capital of the Khmer empire. The Palace area is located directly North of the Baphuon temple and a few hundred meters from the Bayon.

The Palace grounds are enclosed by a laterite wall of which today only the base remains. The 600 meter long by 250 meter wide wall was in turn surrounded by a moat.

At several locations in the enclosing walls were gopura entrance gates. The main entrance is in the Eastern end of the enclosure, at the start of the road from the Palace to the Victory gate, one of Angkor Thom’s city gates. Inscribed in the vestibule of this gate is an oath to allegiance to the King of Angkor.

Structures in the Royal Palace enclosure
The Palace grounds were divided into several sections. An entry court to the East where the main entrance was, the Royal enclosures with the Royal Palace and an enclosure for the women in the West. Besides the Royal Palace, there was a great number of buildings for priests, the King’s wives and concubines, soldiers, Palace guards and others. All these structures that were built from perishable materials have long vanished.

At the center of the Royal Palace area is the Phimeanakas temple, that was built much earlier, between 950 and 1050. The exact location of the Royal Palace itself is unknown. Remains of buildings have been found South of the Phimeanakas temple, which are believed to be the foundations of the Palace. Directly to the East of these is a large cruciform terrace and four sanctuaries, that were possibly library buildings. In the Western section of the Palace grounds is an enclosed area, that might have been where the King’s concubines lived.

The Royal Terraces
Forming the Eastern boundary of the Royal Palace grounds, the Royal terraces stretch out for a length of about 400 meters running North South. The terraces face the parade grounds and the Suor Prat towers.

The Royal Pond
North of the Phimeanakas is the Royal Pond measuring 140 meters long, fitted with laterite steps. Its walls contain sculptings of several animals, like a fish with a horse head, a fish with an elephant head and several sea monsters. The Royal Pond was probably the stage for nautical events witnessed by the King.