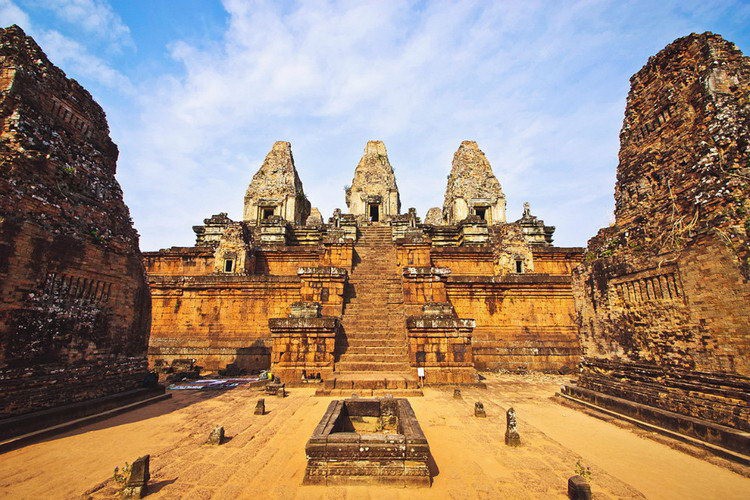 In the early 20th century the Pre Rup had been completely overgrown and covered with soil. The temple was excavated during the 1930’s by French conservators George Trouvé and Henri Marchal.

Stepped pyramid representing Mount Meru
Its architectural style is very similar to that of the earlier East Mebon, the major difference being the stepped pyramid of the Pre Rup that is missing in the East Mebon temple. The laterite and brick structure represents the five mountain peaks of the sacred mountain Mount Meru, the center of the universe in Hindu mythology.

An inscription in the temple mentions that the five prangs were dedicated to Shiva (central tower and one of the surrounding towers), Vishnu, Parvati (the consort of Shiva) and Lakshmi (the consort of Vishnu).

The temple used to be surrounded by moats. There are two enclosures, each with a gopura entrance gate at the center of each side. Between the outer and inner enclosure were long halls of which not much remains today. They were a predecessor of the galleries seen in later temples.

6 large towers to the East
Most striking feature of the Pre Rup temple are the three large towers on either side of the Eastern entrance, the main entrance of the temple. The first tower to the right of the entrance is missing, although the base is there. The tower was either never build or demolished and the stones used elsewhere later. The towers were probably build later during the reign of the next King, King Jayavarman V.

The central tower contains a sanctuary room. The lintels contain Indra riding the elephant Airavata, Vishnu on Garuda (a large mythological bird, the mount of Vishnu) and other depictions.

Inner enclosure
Just past the Eastern gate of the inner enclosure are two large libraries, one on each side of the entrance that probably contained Hindu statues. Between the two libraries is a three meter long structure, that likely served as a pediment for a statue, possibly of Nandi, the sacred bull and mount of Shiva. In the North East corner of the inner enclosure is a small laterite building that has been restored.

Three stepped pyramid
The inner enclosure contains a three tiered pyramid. On the pyramid’s second level are 12 small sanctuaries grouped around the structure that each used to contain a linga, a representation of Shiva. At the center of each side of the pyramid is a stairway leading to the platform with the five towers. The stairway is guarded on both sides by lion statues.

5 Prangs on the upper platform
The upper platform contains five prangs, the largest one in the center, the outer four smaller ones on the platform’s corners. Each have an entrance door to the East and false doors to the other directions. Originally the towers were fully plastered, some of which still remains. A few devata statues decorate its outer walls.

The lintels contain several depictions, but are in a bad state of repair. The central prang contains a sanctuary room where the most important linga was enshrined. It now contains two Buddha images that were installed there later.