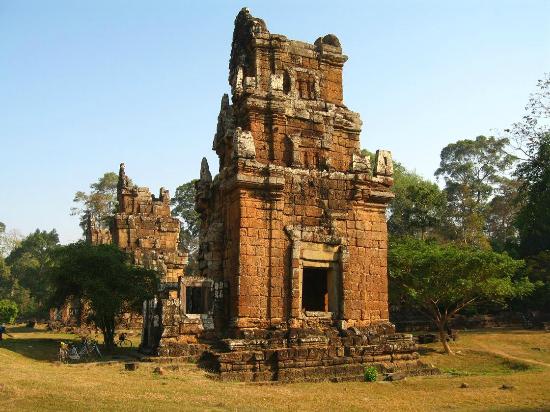 The Prasat Suor Prat are a row of 12 towers, 6 on either side of the road leading from the Royal Palace to the Victory gate. The towers are found East of the Royal terraces, overlooking the parade grounds to the West.

Prasat Suor Prat literally translates to “towers of the rope dancers”. The purpose of the towers is not known. Their design and unusual North – South orientation, instead of the usual orientation either towards East or West, suggests that the towers were not built as sanctuaries.

Used for acrobatic performances?
Several theories exist as to their purpose. According to local legend ropes connected the top of the towers during festivals. Acrobats performed acrobatic acts on the ropes watched by the King from the Elephants terrace.

…Or to resolve legal conflicts…
Another possible purpose is given in the accounts of Zhou Daguan, the Chinese diplomat who spend a year in Angkor until 1297. He says the towers were used to resolve legal disputes. In case a conflict between two men could not be resolved, both men were locked up in one of the towers guarded by their relatives. When after four days the men would be let out of the towers, the guilty party would have developed some kind of disease, while the other would be healthy.

…Or as reception hall for the King’s guests
A more likely theory is the Prasat Suor Prat towers were used as reception halls to receive important guests of the King. From the terraces in front of the towers the guests would have great views of the parade grounds, where festivals, games and army parades would be held.

Design of the Prasat Suor Prat towers
The towers have a square floor plan with two slightly smaller upper floors. Terraces were build West of the towers, overlooking the parade grounds. There are large windows on three of its sides, the sandstone frontons are decorated with lions and Naga sculptings. The entrances open up towards the parade grounds and terraces. Behind the two towers nearest to the road to the Victory gate is a large pool fitted with laterite steps.