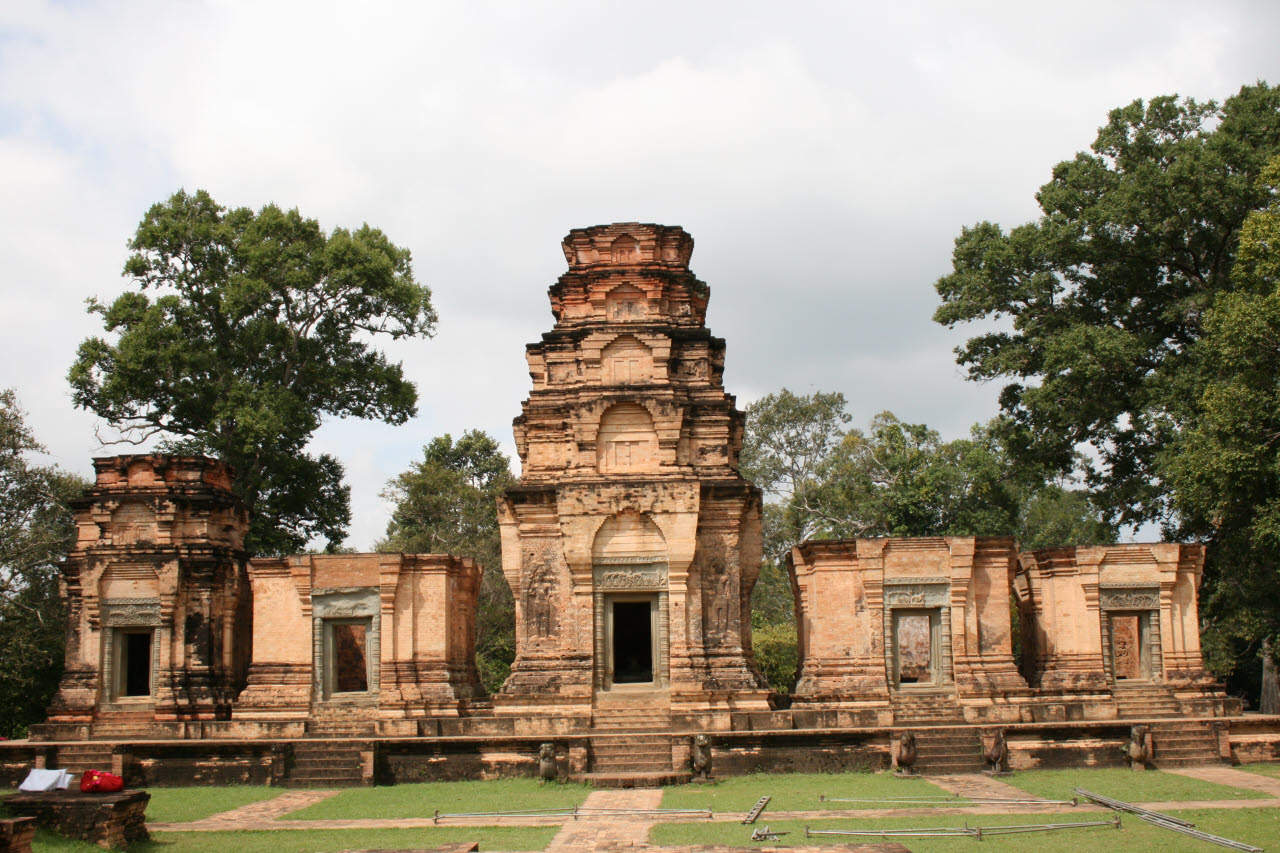 The Prasat Kravan is an early 10th century Hindu monument. It consists of a line of five brick towers built closely together set atop a low platform oriented towards the East.

The monument located a few kilometers East of Angkor Wat was dedicated to Vishnu, the Supreme God of Hinduism. The Prasat Kravan is one of the few Angkor temples that was not built by a King, but by a high ranking Hindu priest.

The towers are of slightly different size, the central tower being the largest, the towers on either side of it somewhat smaller, the outer towers being the smallest. In the interior of the central and Northern tower is a number of sculptures made directly in the brickwork of the towers, a unique feature in Angkor, which is often found in the Cham temples of Vietnam.

In the 1960’s the Prasat Kravan was restored by the EFEO, using as much as possible the original materials. New stones are marked with a “CA” inscription. A very similar temple named Prasat Neang Khmau is found in Takeo province, South of the capital Phnom Penh. Here, two brick towers of very similar architecture were built around the same time as the Prasat Kravan.

The five sanctuary towers
The monument is enclosed by a moat, which is crossed by a small causeway in the Western section of the temple grounds. East of the towers is a large cruciform terrace, which might have been where an entrance gate was which was probably built out of wood or other perishable material since nothing of it remains today.

In front of each of the sanctuary towers is a stairway that was guarded by lion statues, some of which still remain. The entrance door of the central tower contains sculpted Dvarapala guardian figures set in niches. An inscription on the doorpost of the 3½ meter wide central tower mentions that a statue of Vishnu was dedicated here in the year 921. The central sanctuary is still topped with its original four tiers, the Southern sanctuary has two of its tiers remaining, the other three have none.

Bas reliefs of the central sanctuary
The interior of the central sanctuary contains three bas reliefs of Vishnu, sculpted directly into the brick wall. One of the reliefs depicts a storey from the Bhagavata Purana, an ancient Hindu tale originating from India. The scene shows “the three giant steps of Vishnu”. In the tale, Vishnu comes to earth in the shape of the dwarf Vamana. Vishnu requests Bali, King of the Asura demons, to be given a plot of land he could cover with three foot steps. As soon as the King agreed to the request, Vishnu reveals his real size and powers and with three steps covers the entire universe.

Other reliefs show an eight armed Vishnu surrounded by a large number of worshippers in 6 lines, and Vishnu on his mount Garuda. The North tower shows sculptures of Lakshmi, Vishnu’s consort. This sanctuary contained a pedestal and was possibly dedicated to Lakshmi.