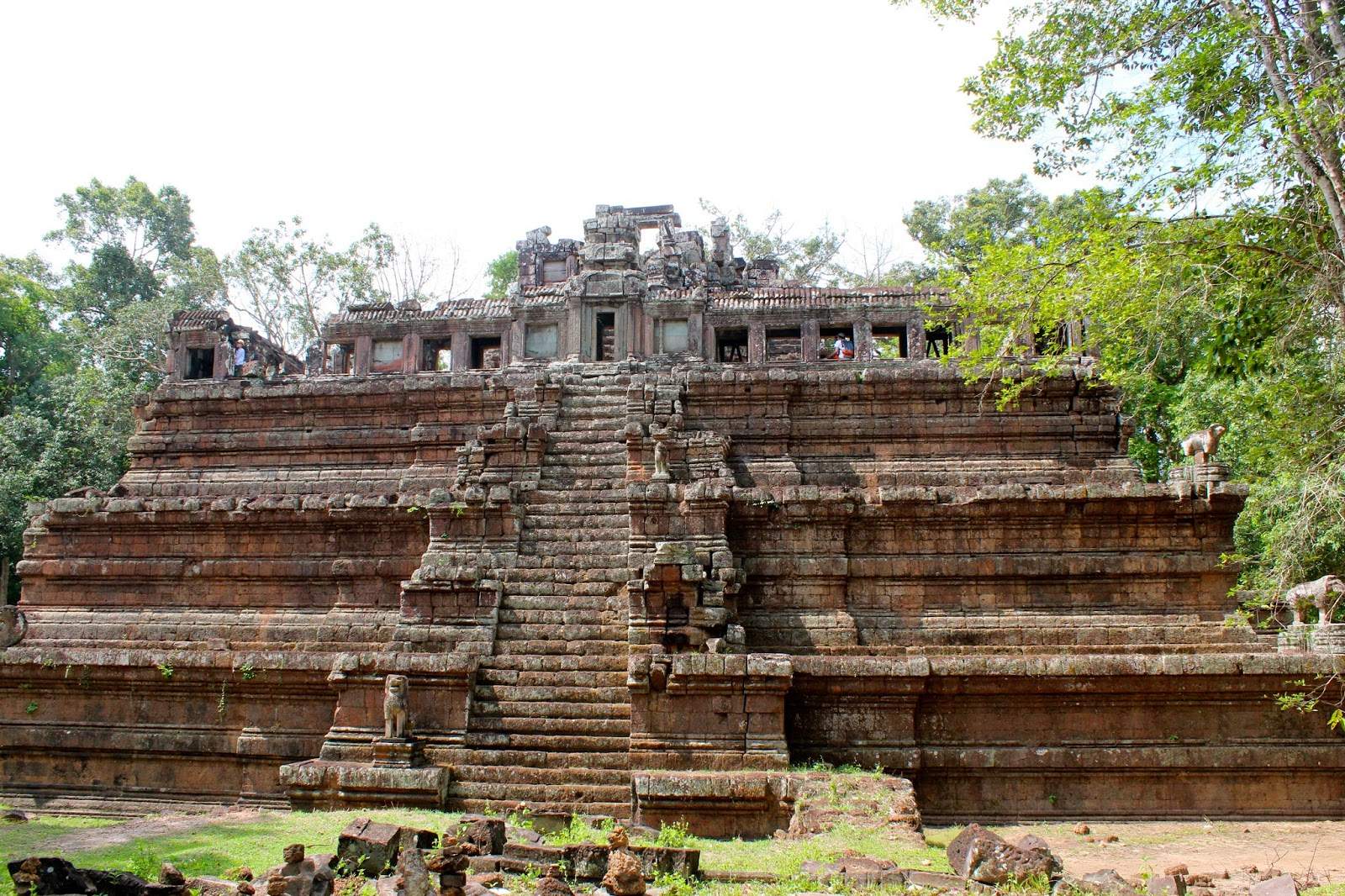 Phimeanakas
Small 3 stepped pyramid temple in the Royal Palace grounds
Name: Phimeanakas
Date: Between 950 and 1050 King Rajendravarman II or Suryavarman I
Location: North West of the Bayon in the city of Angkor Thom
Nearby: Baphuon, Bayon, Royal Palace

The Phimeanakas is a small, laterite Hindu temple in the shape of a three stepped pyramid. The name Phimeanakas translates to “Celestial Palace”. The temple located in the center of the Royal Palace enclosure was used by King Jayavarman VII as his private temple.

Zhou Daguan, the Chinese diplomat who lived in Angkor for a year during the reign of King Jayavarman VII and kept extensive accounts, referred to the Phimeanakas as “the Golden Tower” located in the private living quarters of the King.

Some archeologists believe an older structure existed much earlier at the site of the current structure, since an inscription dated 910 was found that mentions the dedication of a statue of Vishnu. Next to the temple are two pools, that may have been used for bathing or aquatic sports events.

Entrance gopura
The temple is oriented towards the East. The main entrance consists of a gopura building with a central entrance door with a single tower on top of it, flanked by two somewhat smaller entrance doors. The door jambs contain an inscription dated 1011 of the oath of allegiance to the Angkor King.

3 steep tiers of the pyramid
The Phimeanakas pyramidal structure consists of 3 tiers of diminishing size. At the base the structure measures 35 meters long by 28 meters wide, the upper platform measures 30 meters long by 23 meters wide. A very steep stairway leads to the top on all of its four sides guarded by lion statues. Most accessible is the one on the Western side, which is equipped with a handrail. At the corners of each of the tiers are guardian elephant statues.

Galleries and sanctuary at the top
On top of the pyramid is a platform surrounded by small galleries. These were the first vaulted galleries to be build in Angkor, which have been copied on a grander scale in the later monuments. These galleries probably replaced older galleries made out of perishable materials. At the center of the platform are the ruins of a small cruciform sanctuary with four vestibules opening to each of the cardinal points. The structure was likely a later addition to replace the original wooden structure, the “Golden Tower” that Zhou Daguan describes in his accounts of Angkor.

The Phimeanakas stele
In 1916 Henri Marchal of the EFEO discovered a broken stele during excavation works of temple near the Eastern stairway up the temple. The stele, written by King Jayavarman VII’s second wife, contains a wealth of information about the King, his first wife who had passed away and his second wife. The stele tells of the important role the two Queens had in the spreading of Buddhism and of their achievements. It also describes a number of important events that took place during the life of Jayavarman VII, such as battles between the Khmer and the Chams and the King’s coronation in 1181.

The legend of the golden tower
The accounts of Zhou Daguan, the Chinese diplomat who lived in Angkor for a year at the end of the 13th century tell about a legend, believed by the common people of Angkor.

On top of the Phimeanakas, known as “the Golden Tower” lived a spirit in the form of a nine headed snake, that is the Lord of the Khmer Kingdom. Every night the spirit appears in the form of a woman. The King has to climb to the top of the tower and sleep with the spirit. Should he fail to do this for one night, a great disaster is to strike the Kingdom. In case the spirit fails to appear, the King is about to die.