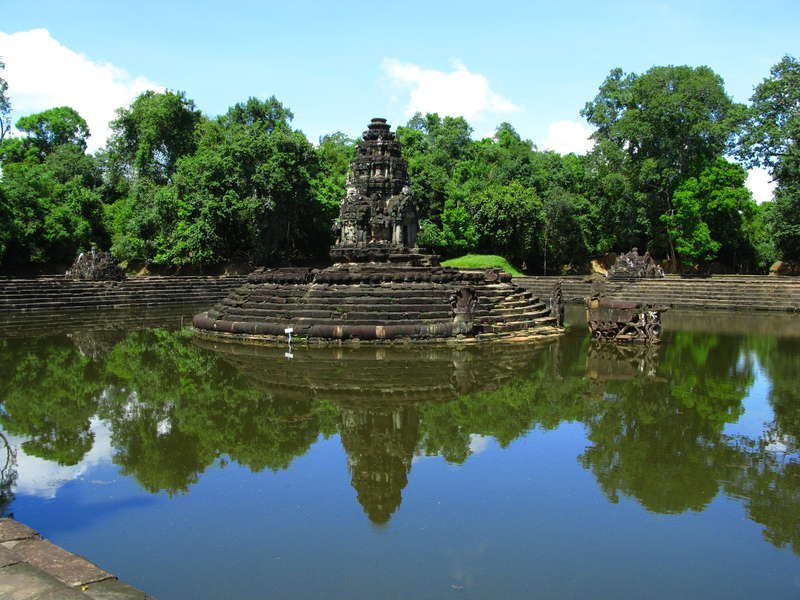 Neak Pean, “the entwined snakes” is a small temple located on an island in the center of the now dry Jayatataka baray, a water reservoir 3,500 meter long and 900 meter wide. Initially dedicated to the Buddha, the temple was rededicated to Lokeshvara, the Bodhisattva of compassion.

Much of the temple area is flooded during the rainy season. A wooden walkway over the waters leads to the central sanctuary, which is fenced off to protect it from further decay.

The Neak Pean was cleared from jungle vegetation in the 1920’s and 1930’s. Restoration works have been carried out using the anastylosis method in the late 1930’s.

Central pond surrounded by four smaller ponds
The temple area on the island in the center of the Jayatataka baray is enclosed by a square laterite wall measuring 350 meters wide, in which were contained a number of ponds. While the outer ponds have gone, the central pond and four surrounding ponds remain.

The central pond of Neak Pean symbolizes lake Anavatapta, a lake located in the center of the world in Buddhist cosmology. At each of its four sides is a smaller pond (srah) and a chapel connecting the large central pond with the surrounding ones. The four chapels were used by pilgrims who would wash away their sins in the cleansing waters of the central pond. In each chapel there is a stone gargoyle in a different shape, namely a head of a King, an elephant, a lion and a horse. Through their open mouths flowed water that filled that chapel’s small basins with the healing waters from the central pool. Each of the chapels contains a base, on which the main idol stood. Several depictions of Lokeshvara can be found inside the chapels.

Central sanctuary
In the center of the central pond is a circular island with a diameter of 14 meters, on which stands the sanctuary. The sandstone sanctuary is set on a circular stone base, encircled by two Naga snakes, guarding the East entrance of the temple. At the other end (West) their tales intertwine, from which the temple derives its name; Neak Pean translates to “the entwined snakes”.

Originally the sanctuary had doors on each of the four cardinal directions. At one point three of them were closed, leaving just the East entrance. The false doors were adorned with large carved depictions of Lokeshvara, believed to posses the powers of healing. On the pediment over the East entrance is a depiction of the Buddha. The image of the Buddha that was enshrined inside the sanctuary is no longer there.

Scattered around the central sanctuary are several lingas (the representation of Shiva), and Yonis (the female counterpart of the linga). In front of the East entrance stands a statue of the flying horse Balaha, often partly submerged in the rainy season.

The flying horse Balaha
The flying horse Balaha depicts a story from one of the Jataka tales, the stories that tell about the previous lives of the Buddha. A group of merchants were sailing the ocean, when a violent storm broke out that wrecked their ship. Clinging on to pieces of wood from the broken ship the merchants ended up on a beach of an island named Singhala. The island was inhabited by demons, that took the shape of attractive young women. The sailors were warmly welcomed by the women, who took them to their homes where they had children and lived as a family.

One night the captain of the ship discovered a house with no doors and no windows from where loud cries of misery and weeping emerged. Locked inside the house were merchants previously stranded on the island, who told the captain that the women were in fact demons and that they had to escape the island while they still had the chance. Once a month the flying horse Balaha would appear on the island to rescue stranded sailors. The merchants are seen clinging to the horse’s manes and tail, escaping danger.

The storey serves as a reminder not to focus on worldly matters and temptations and instead reach for lasting happiness by following the teachings of the Buddha.