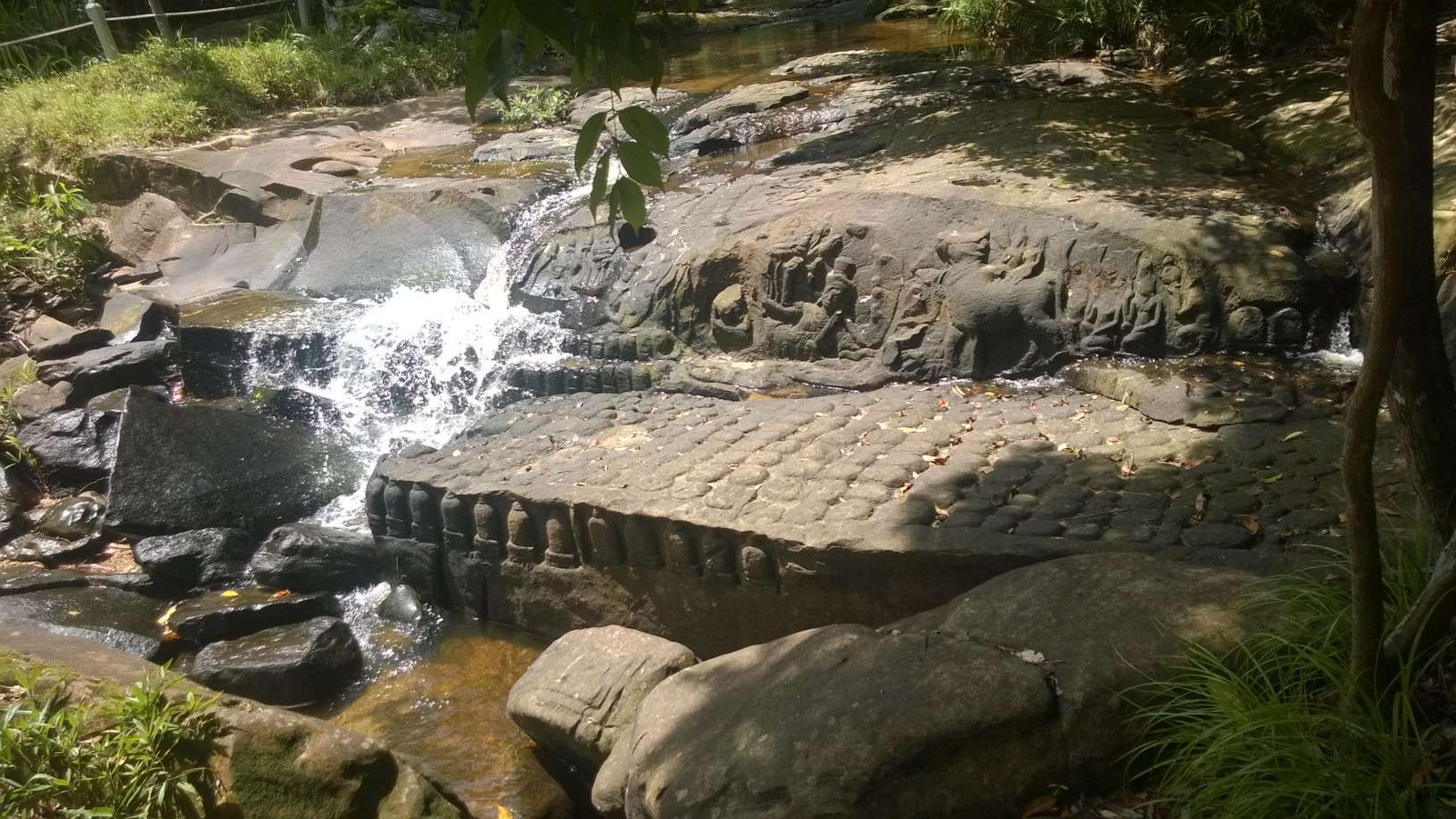 Kbal Spean is an ancient Khmer site in Phnom Kulen National Park, a remote place located at considerable distance from Siem Reap and the main Angkor monuments. The site stretches out over a length of about 150 meters through the jungle along the Stung Kbal Spean river, known as the “river of a thousand lingas”.

There is no temple at Kbal Spean. The river bed is covered with hundreds of lingas, while depictions of Hindu deities have been carved into the rock along and in the river. Most of the lingas and carvings were made in the 11th century during the reign of King Udayadityavarman II.

To protect the lingas and sculptings from further decay the river bed has been fenced off; visitors can view the ancient sculptings from a small distance. Kbal Spean which translates to “stone bridge head”, is named after the natural stone bridge under which the river flows for a section.

“River of a thousand lingas”
In several sections of the river hundreds of lingas and several yonis have been carved out of the sandstone river bed. The linga is the representation of Shiva, while the yoni is the female counterpart of the linga. The river water was sanctified by running over the lingas in the river bed. The water then flowed from the hills of Phnom Kulen to Angkor and the temples.

A number of carvings of Hindu deities have been made in rocks along the river, including several carvings of Vishnu reclining on Ananta-Shesha, the King of the Nagas and Lakshmi, his consort massaging his feet. Other carvings show depictions of Brahma, the Hindu God of creation and Shiva and his wife Uma riding Nandi the bull.

In the South section of the Kbal Spean site is a waterfall best seen during the rainy season. Immediately North of the waterfall is a small pool. Hidden under the water surface are carvings in the rock of a crocodile and Vishnu reclining on Ananta-Shesha, as well as carvings of the Hindu Trimurti Brahma, Vishnu and Shiva.

How to get to Kbal Spean
Because of its remote location it takes time and effort to get to Kbal Spean. The trip from Siem Reap takes about 1 hour by car and 1½ hours by tuk tuk. From the car park it takes another 45 minutes to one hour to get to the site. A well marked 1,500 meter trail uphill through the forest with wooden stairs for the steepest sections leads to the Kbal Spean river bed. The site opens from 8 am until 3 pm.