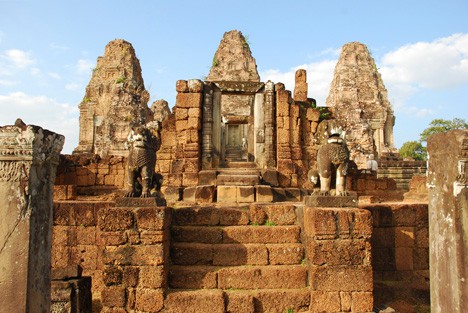 The East Mebon is a mountain temple dedicated to Shiva build by King Rajendravarman II halfway the 10th century. It was constructed on a man made 120 meters wide island in the East Baray, a huge water reservoir measuring 2 by 7 kilometers, and was only reachable by boat.

The baray, which is now dry, was named Yasodharatataka at the time, and was located East of Angkor Thom. The East Mebon was not Rajendravarman II’s state temple, that was Pre Rup that was to be build 9 years later, just outside the baray and directly South of the East Mebon.

The temple was restored in the 1930’s by Henri Marchal and Maurice Glaize, two French conservators of Angkor. Its main attraction is its intricate lintels, that are very well preserved and are among the best in Angkor.

Mountain temple dedicated to Shiva
An inscribed stele found at the site states that the sacred linga Sri Rajendreshvara was consecrated in the year 952 and was placed in the central sanctuary. The outer four surrounding sanctuaries were dedicated to Shiva, Parvati (the wife of Shiva), and the Hindu Gods Vishnu and Brahma.

Like the earlier Phnom Bakheng, the temple was build to represent Mount Meru. The five towers on the square platform symbolize the five peaks of the mythological mountain. The East Mebon however does not have the tiers of the pyramid shaped Phnom Bakheng.

Floor plan of the East Mebon
At the center of each of the four sides just outside the outer enclosure are laterite landing platforms for boats. Contained by the outer enclosure wall is the first platform. On each of its corners is an elephant standing guard.

The lintels on the five brick towers show depictions of Indra riding the three headed elephant Airavata, the God Skanda on a peacock, Shiva on his mount the bull Nandi, garudas, nagas, makaras and warrior figures.

The towers have a real door to the East, while there are three fake doors to the other directions. The central tower contains a sanctuary chamber that enshrined the temple’s most important linga.