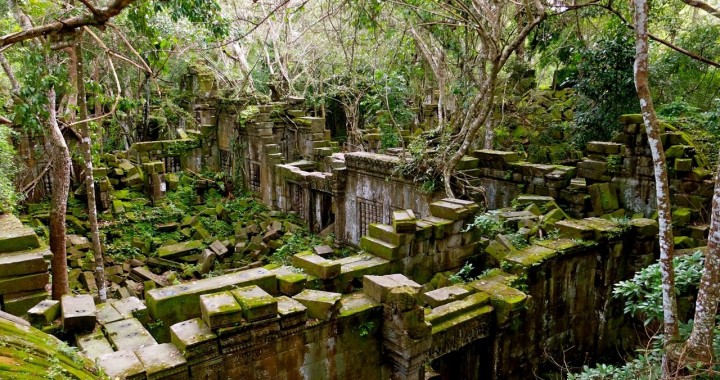 Beng Mealea is a large, unrestored temple surrounded and partly overgrown by jungle near Phnom Kulen National Park at considerable distance from Siem Reap and the main Angkor temples.

The temple built out of large sandstone blocks adorned with both Hindu and Buddhist depictions is oriented towards the East. A wooden partly elevated walkway leads to the inner sanctuary at the center of the temple.

As no foundation stele has been found, the temple’s founding date is not known with certainty. Judging from its style archeologists believe that Beng Mealea was built by King Suryavarman II during the first half of the 12th century, just before or around the same time as Angkor Wat.

Approach to the temple
Paved walkways from each of the four cardinal directions lead towards the temple. Located East of the Beng Mealea was a baray, a large water reservoir, which has dried out. On its West border is a laterite embarkation terrace where once stood a wood pavilion with four courtyards. A walkway lined with boundary stones leads to the moat and the East entrance of the temple.

A 45 meter wide moat encloses an area about 1 kilometer long and nearly 900 meters wide. The outer enclosure probably consisted of an earthen wall and a wooden palisade. All that remains today is a cruciform terrace at the center of all four sides. From each of the terraces a walkway with multi headed Naga snakes, in various states of preservation, leads to the temple. At the West terrace near the moat is a Dharmasala or “house of fire”, a structure built to shelter traveling pilgrims.

Third and second enclosure
The central sanctuary is surrounded by three enclosures with galleries. The enclosing walls are intersected at the center by a gopura entrance building. The third enclosure measures 181 meters long and 152 meters wide. Behind the East gopura are large cruciform terraces connecting the the second enclosure, flanked by library buildings with colonettes in the windows. Near the North library building is a large broken stone container resembling a sarcophagus. Past the South gopura are two large halls. The one to the right has four small courtyards surrounded by galleries.

The first enclosure holding the central sanctuary
The first enclosure contains the central sanctuary. The large sanctuary which must have been very imposing has completely collapsed; all that remains is a massive pile of stones. To the East of the central sanctuary is a long room flanked by two library buildings. Lintels and pediments as well as the base of columns are adorned with mostly Hindu depictions as the churning of the ocean of milk, the God Indra riding the three headed elephant Airavata, Shiva, Vishnu on his mount Garuda, the birth of Brahma, Krishna supporting Mount Govardhana, as well as battle scenes. On the walls are several sculpted devatas, Hindu deities.

How to get to Beng Mealea
Because of its location at considerable distance from Siem Reap and the main temples, it takes some time and effort to get to Beng Mealea. The 70 kilometer trip from Siem Reap can be made by car or tuk tuk. An air conditioned car with driver takes a little over an hour, the fare would be around US$ 70. A slower alternative is a tuk tuk ride which takes about 2 hours at a cost of US$ 30.

Beng Mealea is one of the few temples for which the Angkor pass is not valid. There is an extra admission fee of US$ 5 to visit the temple.