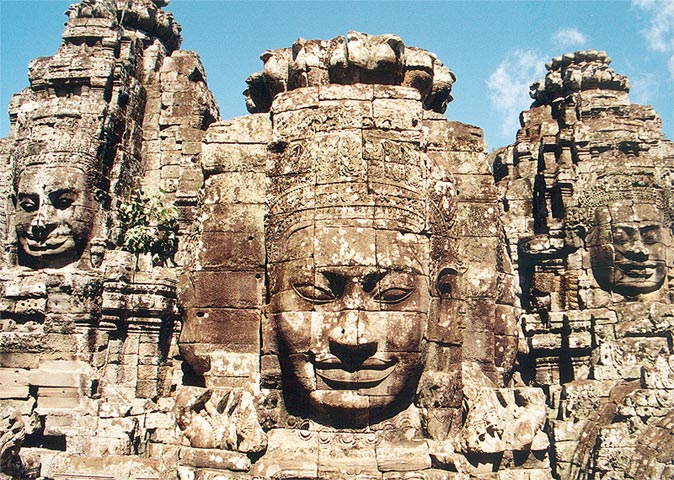 The Bayon was the state temple of King Jayavarman VII, built at the end of the 12th century. It is a mountain temple built to represent Mount Meru, the center of the universe in Hindu and Buddhist cosmology.

The King had the temple constructed in the center of Angkor Thom, the 9 km2 large capital city of the Khmer empire. Four roads from the four entrance gopuras of Angkor Thom lead directly to the temple.

Unlike most Khmer temples, the Bayon is not surrounded by a moat and walls with gopura entrance gates. Archeologists believe that instead the moat and walls of Angkor Thom served as the temple’s line of defense.

Buddhist temple with separate shrines for Vishnu and Shiva
The Bayon was built as a Buddhist temple. A statue of the main idol, a seated Buddha image sheltered under the hoods of the snake Mucalinda, was discovered in a pit under the main shrine. A few decades after the death of King Jayavarman VII, the temple was turned into a Hindu temple when King Jayavarman VIII reverted the official Khmer religion back to Hinduism; images of the Buddha were destroyed or turned into Hindu images.

Although the Bayon was a Buddhist temple, other Gods were also worshipped. Separate shrines were dedicated to Vishnu and Shiva, while countless other deities were worshipped.

The Bayon is best known for the mysterious faces on its many towers. Due to its many alterations over time, the structure is of a very complicated design and has a cluttered feel, with the many towers and other structures cramping the monument. The Bayon has three enclosures. The galleried 3rd and 2nd enclosure, and the inner enclosure, which contains the 3rd floor platform with the central sanctuary.

At some point the temple was deserted and became overgrown by thick jungle. Clearing of the monument was done in the 1910’s. The face towers and the central sanctuary were restored by the EFEO in the 1940’s using the anastylosis method. Since the end of the 20th century, the Japanese Government Team for Safeguarding Angkor (JSA) maintains the monument.

The Bayon’s face towers
The Bayon is best known for its large number of serene faces sculpted on its towers. Originally there were 49 towers, decorated with large carved faces looking into each of the four cardinal directions. Close to 200 faces, the largest ones being almost 2½ meters high, decorate the 37 remaining towers of the first and second enclosure. While most towers contain four faces, some only have three, and one tower only bears a single face, probably due to a lack of space.

Initially the faces were believed to represent Brahma, the Hindu God of creation depicted with four heads. When it was later established that the Bayon was not a Hindu temple but a Buddhist one, archeologists believed the faces to be of Lokeshvara, the Bodhisattva of compassion. The similarity of statues of Jayavarman VII and the face towers had led some to believe that it is the King himself whose face is depicted on the towers.

Approach from the East
Approaching the Bayon from the East is a large terrace with guardian lions and Naga balustrades. To the left and right of the terrace used to be large pools, the remains of which can still be seen. A cruciform gopura gives entrance to the third enclosure.

The third enclosure
The third enclosure measures 160 meters long by 140 meters wide. It consists of galleries with 4 pavilions at the corners and 4 gopura entrance gates at the center of each side. The pillars of the galleries are decorated with a great number of dancing Apsaras.

The 3rd enclosure outer galleries contain extensive sculpted bas reliefs, mainly depicting scenes of historical events, battles and scenes from daily life in Angkor. They provide a good source of information about historical events and the way Angkor people lived at the late 12th to early 13th century. Inside the third enclosure, on either side of the Eastern entrance gopura is a library building.

The second enclosure
The second enclosure measures 80 meters long by 70 meters wide. They consist of corner galleries and inner galleries built on different levels. Its corner towers and intermediate towers are decorated with large faces of Lokeshvara. The bas reliefs sculpted on the galleries contain mainly Hindu religious and mythological scenes.

The central sanctuary that has a 5 meter diameter is accessed on the East through a number of chambers and vestibules. On either side is a structure, that might have been libraries. Around the circular central sanctuary are eight sanctuary towers bearing sculpted faces, forming the circular first enclosure. Around it are four satellite sanctuaries. The Western sanctuary is dedicated to Vishnu, the Northern one to Shiva. Next to each of them, on the 2nd floor is a structure that might have been a library. The Southern sanctuary is dedicated to the Buddha.

During excavation works of the central sanctuary, a large broken Buddha image was discovered in a pit under the sanctuary. The 3.60 meter high image in the meditation mudra is seated on the coiled body of the snake Mucalinda, sheltered by its hood. The image has been restored and is now enshrined in a pavilion at a Buddhist terrace named Vihear Prampil Loveng, along the way from the Royal Palace East to the Victory gate.

Outer bas relief galleries
The outer bas relief galleries found on the third enclosure mostly depict historical events, battles and events that took place during the reign of King Jayavarman VII. Archeologists obtained a wealth of information about Angkor history from the scenes shown here. In several sections of the outer galleries carvings have been left unfinished. Among the many reliefs are: