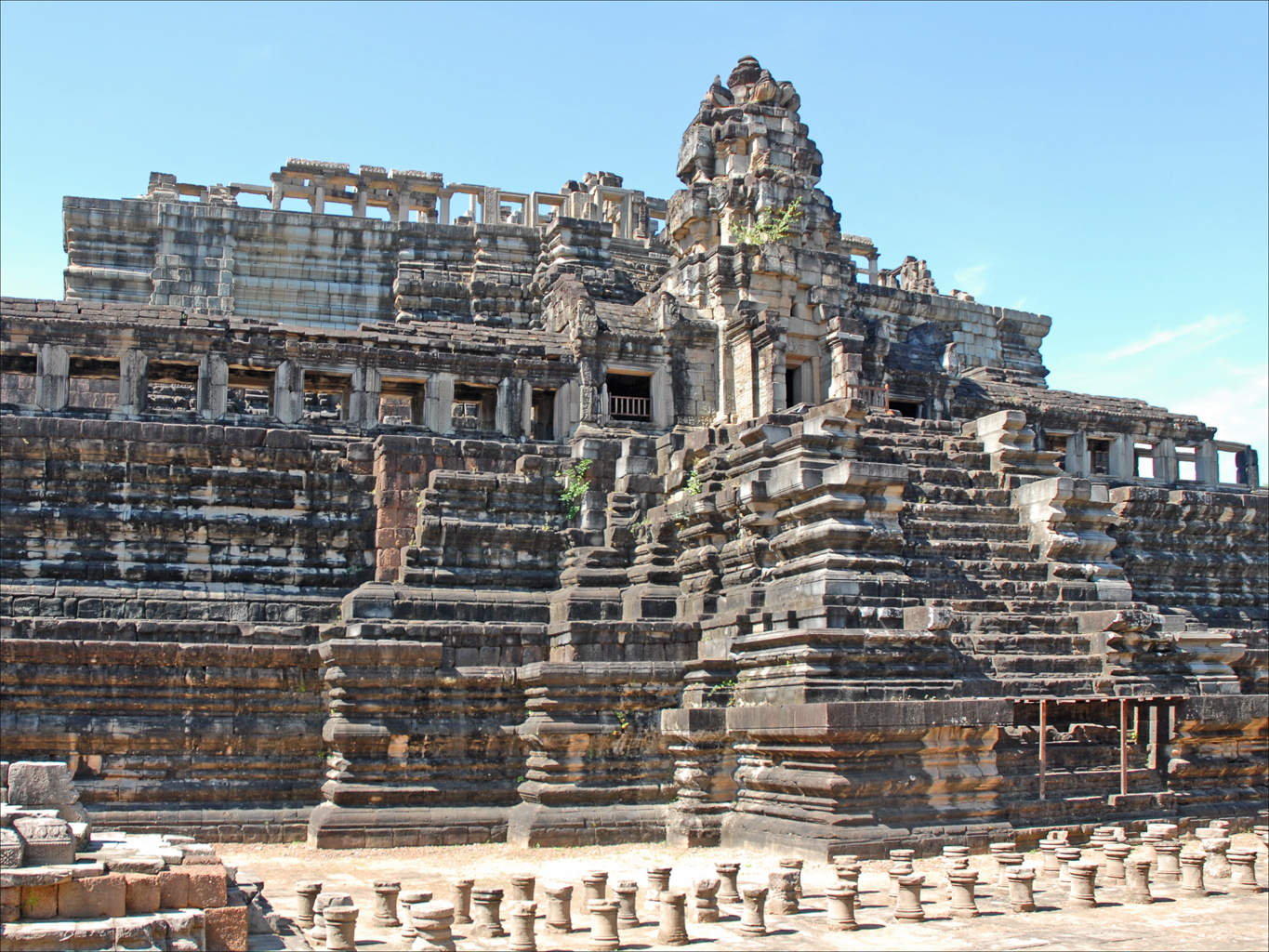 The Baphuon is the state temple of King Udayadityavarman II. It is located in the old Khmer capital city Angkor Thom, between the Royal Palace and the Prasat Bayon. The sandstone monument that was dedicated to Shiva is in the shape of a stepped pyramid.

When the temple was converted into a Buddhist temple in the 15th century, part of the Baphuon was demolished and the stones used to build a Buddha image on the West end of the temple. The very large reclining Buddha image, which shape is difficult to make out, was never completed.

Restoration of the temple
When the Baphuon was cleared in the early 20th century it was overgrown, partly collapsed and in a very poor state of repair. The daunting task of restoration was led by the EFEO, École française d’Extrême-Orient using the method of anastylosis. Most of the temple was dismantled and the hundreds of thousands of stones laid out and numbered. The unstable base of the monument was reinforced. After decades of restorations, the Baphuon was once again opened to the public in 2011.

Layout of the Baphuon
The main entrance facing East is a large structure of gopuras connected by galleries. It reminds of the main entrance of Angkor Wat. A number of devata statues decorate the gate. Behind the gate is a sandstone walkway, a little above ground level. About halfway the walkway, between the temple and the entrance gate is a pavilion, its walls decorated with panels containing several depictions of animals, hunters and warriors. On the South end of the walkway is a large pool. On the Western side of the Baphuon is another entrance gate and an enormous reclining Buddha image that was build centuries later, but which was never completed.

Three enclosures
The walkway from the Eastern gate leads to the third enclosure, that has an entrance gate on all four sides. The enclosure was surrounded by galleries, most of which have disappeared. In the 15th century the stones were used to construct the giant reclining Buddha on the West end of the temple.

Inside the third enclosure past the East entrance gopura are the remains of two library buildings with vestibules on all sides.

The second enclosure has four entrance gopuras that are decorated with several depictions from Hindu mythology, including scenes from the Indian epics Ramayana and Mahabharata, as well as flower patterns, animals, warriors fighting battles and devata figures.

Single sanctuary prasat
The top of the structure is a platform measuring 42 meters long by 36 meters wide with a single sanctuary of which very little is left today. Inside was enshrined the most important linga, the representation of Shiva. The platform is surrounded by a gallery with an entrance gopura on each of its four sides.