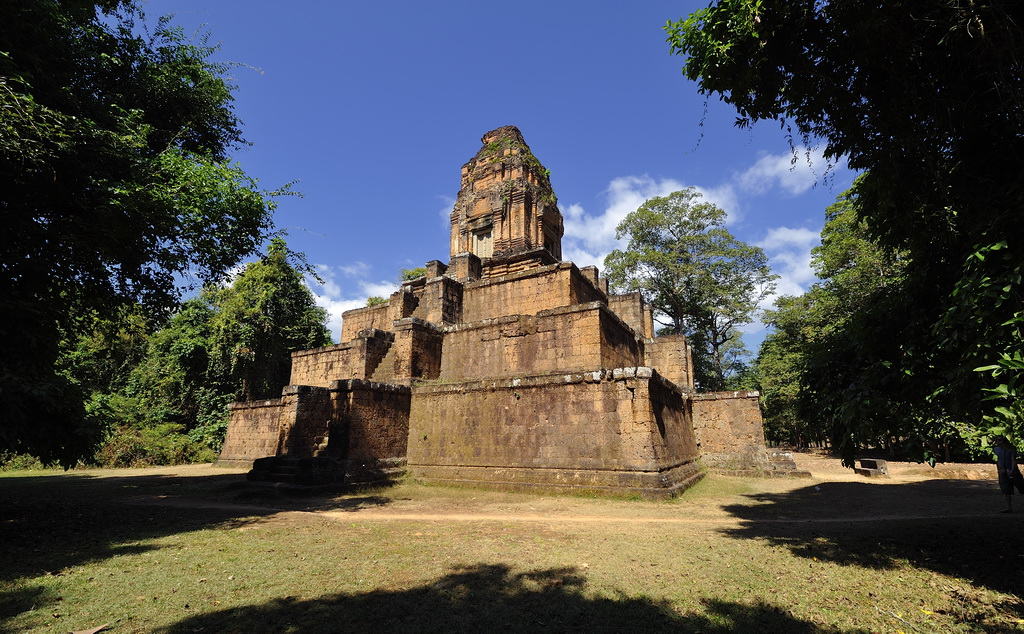 The Baksei Chamkrong is a 10th century temple found near the Angkor Thom South gate. The very steep pyramidal temple topped with a single prasat tower was built as a Hindu sanctuary dedicated to Shiva.

The name Baksei Chamkrong translates to “the bird that shelters under its wings”.

The temple was built by Harshavarman I in the early 10th century. Soon after his reign, the capital of the Khmer Kingdom was moved to Koh Kher, North of Angkor. The temple was completed and dedicated in the year 948 by King Rajendravarman II, after the capital had been moved back to Angkor.

Stepped pyramid
East of the temple are the remains of a brick wall and a gopura that was guarded by lions. A few steps and a single guardian lion are all that remain today. The stepped pyramid consists of four laterite tiers of diminishing size. The lowest tier measures 27 meters long, the 4th tier 15 meters. The square, symmetrical structure reaches a height of 13 meters. Four very steep staircases at the center of the pyramid lead to the upper platform with the prasat.

The Khmer used certain building techniques to make the temple look taller than it actually is. The stairway narrows towards the top, while the height of each tier is smaller than that of the one below it, thus creating a perception of increased size.

Platform with a single prasat
Atop the fourth tier is a small platform with a single prasat. The brick tower has one real door opening to the East, the other ends have false doors. Most of the decoration on the exterior of the prasat has disappeared, though the shape of sculpted devatas can still be seen. The sandstone lintel over the Eastern doorway contains a carving of Indra on the three headed elephant Airavata, and one of Ganesha.

The doorjamb of the Eastern entrance of the sanctuary tower contains an inscription that provides information about the history of the Baksei Chamkrong temple. The inscription contains praise of several Gods and of King Rajendravarman II, listing his accomplishments. It also tells of the dedication of a golden statue of Shiva in 948. In the back of the cella is a reclining Buddha image of a much later date.