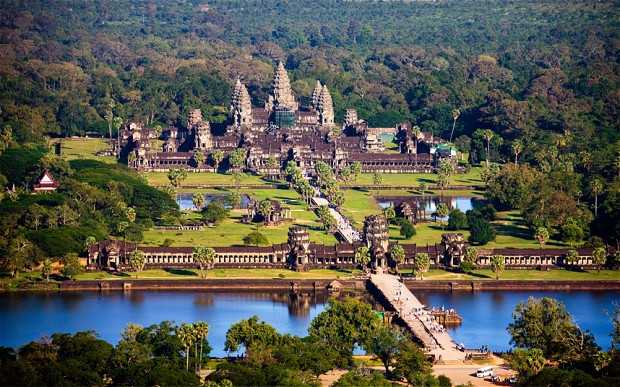 Angkor’s most impressive and best known temple, Angkor Wat is the best preserved of all the Angkor monuments. The temple is an object of pride for Cambodia, its depiction appears on the national flag.

It is a richly decorated, very large temple; the total temple area including the moat measures 1.5 kilometers long by 1.3 kilometers wide, or a total of about 2 square kilometers. Angkor Wat is the biggest Hindu temple in Cambodia.

Angkor Wat was the state temple of King Suryavarman II, who built the temple during the first half of the 12th century. He was one of Angkor’s greatest Kings who ruled for almost 40 years and expanded the Khmer empire. Some historians believe that the temple also served as a funerary temple for the King. This could explain its orientation to the West; the setting sun (in the West) symbolizes the end of the cycle of life.

The temple’s three tiers are surrounded by large galleries, that were introduced in earlier temples like the Ta Keo. One of Angkor Wat’s major attractions are the many intricate and well preserved bas reliefs with depictions of scenes from the epics Ramayana and Mahabharata, as well as many hundreds of statues of female devatas, a Hindu deity.

Angkor Wat was cleared at the start of the 20th century, after which extensive restoration work has been carried out. Around the end of the 13th century Angkor Wat was converted into a Buddhist temple.

Approach to the temple
Surrounding the temple complex is a 190 meter wide moat. At the Western end is a 12 meter wide bridge, in front of which is a terrace where lions and Naga snakes guard the temple. Crossing the bridge the visitor approaches the impressive Western gate, which was build to resemble the front view of the temple itself.

The structure consists of long galleries with a three part gopura topped by towers that have partly collapsed. At both ends of the structure is a pavilion, large enough to enable elephants to go through. The Western gate contains apsaras and devatas as well as magnificent carvings on its lintels showing Vishnu, Garuda, warriors and scenes from the epic Ramayana. Only after passing the Western gate, the Angkor Wat temple comes in sight.

Behind the Western gate is a 350 meter long processional walkway elevated about 1½ meters above the ground towards the temple. On either side of the walkway is a library building. Past the libraries are two lakes, reflecting the silhouette of the of Angkor Wat’s towers. The temple itself is build on raised platform about 330 meters long and 255 meters wide. The structure comprises of three rectangular tiers each higher one smaller than the one below it encircled by long galleries with corner towers and a gopura in the center of its sides.

Bas reliefs galleries of the third tier
The third tier is surrounded by long concentric galleries. Its walls contain some of the finest and best preserved bas reliefs of Angkor Wat, including:

The platform with 5 lotus bud shaped towers
The second tier measuring 100 by 115 meters is enclosed by galleries. On each of its four corners are towers that have partly collapsed. On top of the structure is a square platform about 55 meters wide that contains five towers shaped like lotus buds. The platform is surrounded by galleries, with a sanctuary tower on each if its corners.

In the middle stands the 42 meter high central sanctuary on each side opening to a vestibule in which Buddha statues are found. The walls of the tower are decorated with well preserved devatas. Inside is the cella, a chamber that enshrined a large statue of Vishnu.