Soy Lun takes off her hat and puts a hand in her pocket. She pulls out not a wallet or a phone, but a tarantula as big as her palm.

“This one crawled up my leg when I was selling them so I kept it,” she laughs.

Every day, Soy receives crawling sacks full of the huge, hairy spiders and counts them out into plastic bags like she’s doling out candy.

Soy and her husband Kong Hi are one of two tarantula wholesalers in their town, Skuon, which sits on a junction connecting three of Cambodia’s biggest cities: Phnom Penh, Siem Reap and Kratie.

Skuon is famous across Cambodia for its deep fried spiders, and for traders like Soy and Kong, the idea of a spider being anything less than delicious is bizarre. 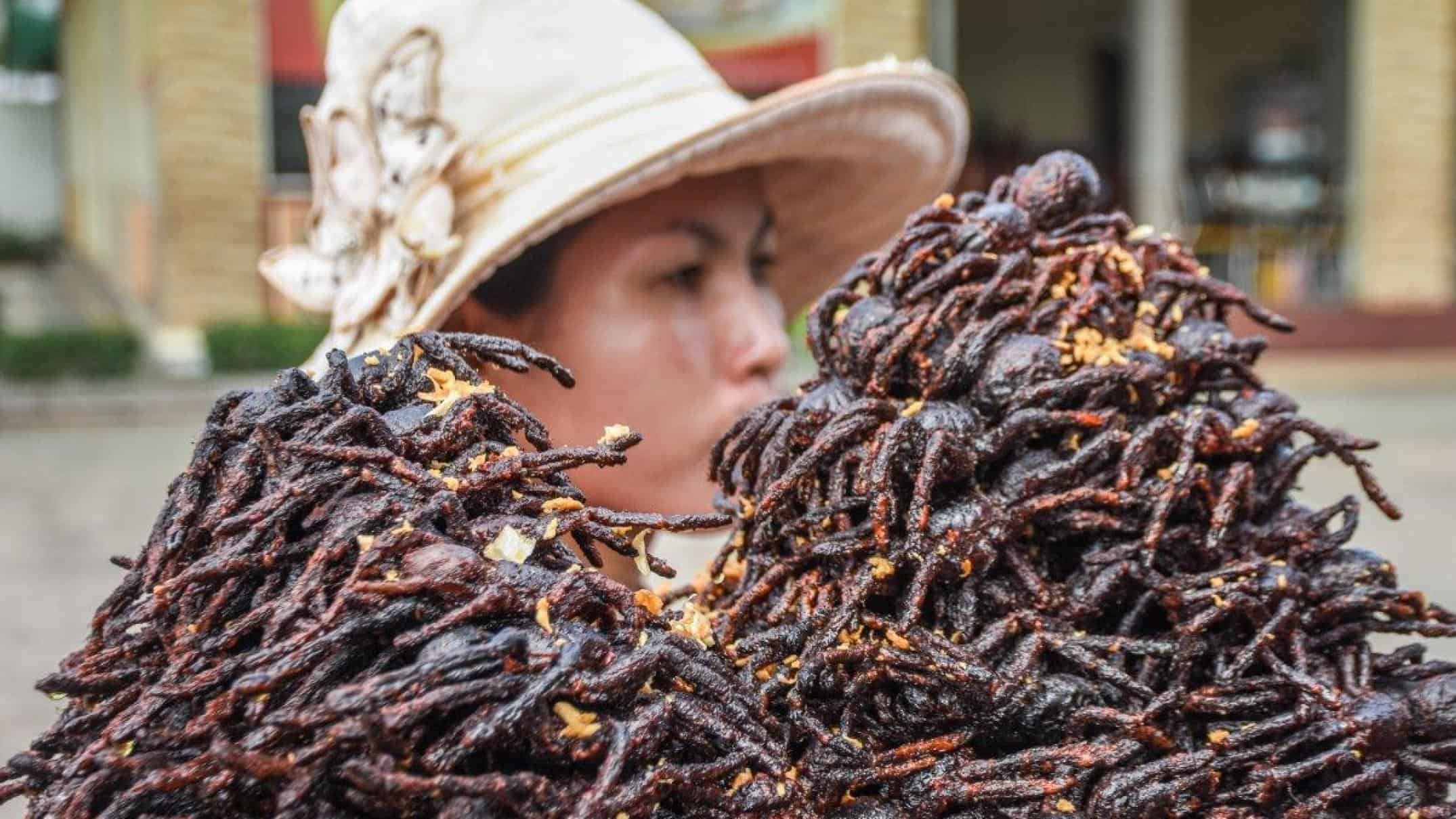 “In Australia, what kinds of spiders do you have?” Kong asks, fascinated.

“Can you eat them? What is the size of the spider that can kill you?”

As well as wholesaling, Soy and Kong sell fried tarantulas at a busy intersection. They only sell female tarantulas, prized for the eggs they carry in their abdomens which look and taste like tiny fish roe. Male tarantulas fetch just half the price.

“We don’t gut them, just wash them in water and throw them in the pot, then fry them up with spices,” says Kong.

They can also be grilled and dipped in sauce.

“It kind of turns into jerky, the texture,” says Kong. “I don’t think you can put them in a soup because they will become all fluffy!”

But over-hunting coupled with widespread deforestation is putting pressure on the tarantula population. Soon, there may not be any spiders left — so I’m about to try one.

The first thing I notice about the creepy snack is just how much it still looks like a spider.

I buy two of them — one male and one female. They come in a plastic bag, still a little hairy and glistening with the oil they were fried in.

Even the locals find it hard to explain the taste of a tarantula. Some say it’s like crab, but most have told me the only way to know is to try it.

The logical thing to nibble at first is the legs. They are crispy with the skin slightly separated from the meat, like tempura.

They don’t taste of much, kind of like cylindrical potato chips.

It’s trickier to get into the body — like I’m pushing my spoon into a stress ball, which doesn’t split but just bulges instead.

The abdomen is slightly bitter because all the organs remain inside but the eggs themselves are surprisingly tasty.

The rest of the flesh tastes mainly of the spices it was fried in.

For me, the whole experience was the kind of thing you would only ever do once, ideally after a lot of Angkor beer, but for many locals, these creepy snacks are the pinnacle of delicious.

Tarantulas — or A-Ping — have been part of Cambodia’s cuisine for generations.

Originally, they were just another kind of protein, along with a range of other insects.

“It was more for the people who farmed,” says Sreynoch, a Siem Reap local. “If they found a tarantula [or anything else] while they were out, they would bring it back home to cook.”

During the 1970s, the tarantula became an essential source of food as Cambodia fell under the Khmer Rouge regime.

“People ate literally anything that would make them less hungry,” says Sreynoch. “According to my mum, people even ate geckos and other lizards.”

Kong opened his business in 1995 when a few vendors started selling tarantulas on the side of the road.

“I didn’t have a job back then and I needed to provide for my family,” he says. “I had the idea of buying the tarantulas and distributing them so others could also sell them.”

As commerce picked up and people started to travel more, the demand for deep-fried A-Ping grew, and because Skuon was located on one of Cambodia’s most significant intersections, the town became the epicentre of the trade.

According to Kong, the industry’s growth was accelerated by demand from Cambodia’s wealthy for rare foods.

“There are other animals and even some endangered animals that are considered delicacies, such as cobra, turtle, coconut worms,” says Kong.

Tarantulas are believed to be good for throat, lung and heart ailments, respiratory problems and back pain. They are also used to stimulate sexual desire and to “make women more beautiful”.

According to Kong, people believe the spiders are “clean because they eat herbs and plants”. In reality, they eat insects.

Tarantulas are believed to be good for throat, lung and heart ailments, respiratory problems and back pain. They are also used to stimulate sexual desire and to “make women more beautiful”.

According to Kong, people believe the spiders are “clean because they eat herbs and plants”. In reality, they eat insects.

How to catch a spider

Kong and Soy source their tarantulas from farmers all over Cambodia. The supply chain is fluid.

“Farmers might find spiders, then one guy collects them and brings them to me or sends them through the bus or something, sometimes I go and get them, it really depends on the situation”, says Kong.

A-Ping live in the jungle in deep holes, covered with a thin film of spider web. 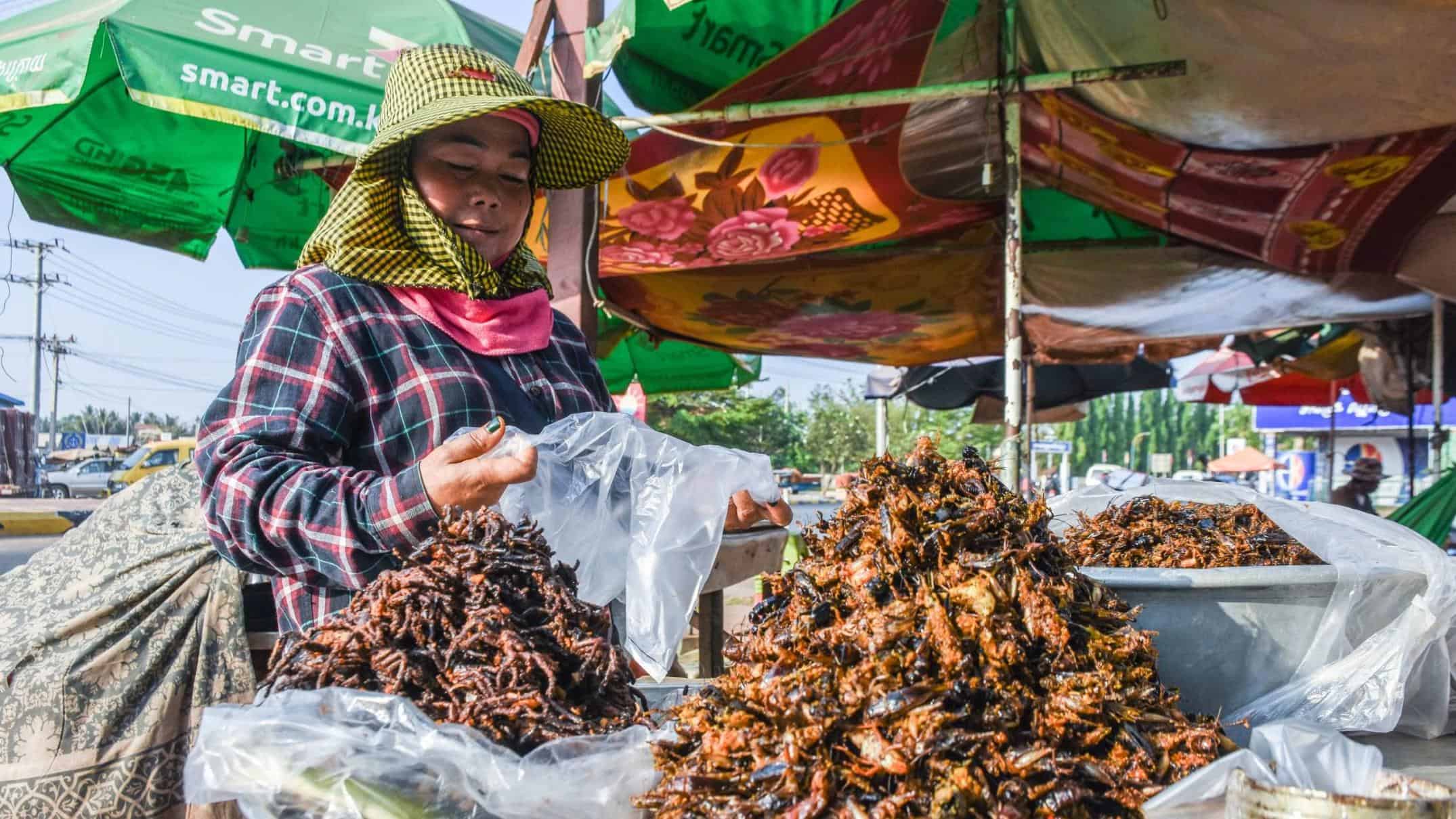 When farmers find a hole, they dig until the spider emerges.

“If it’s too deep it’s hard to keep on digging so they use to use a leaf to get the spider to come out,” says Ki, a local motorbike taxi driver. “Now some people use a chemical.”

When the spider emerges, they grab it by its back and remove its fangs.

“They use the farming tool as a knife and push the tool into the fangs,” says Kong. “If they don’t know how to do this, they just use nail clippers to cut off the fangs.”

Without their fangs, A-Ping begin to die.

But occasionally one slips through with fangs intact and if you’re bitten, the pain can last for hours.

Most of the people who buy tarantulas are locals, and because the taste is so distinct, demand is high.

One vendor, Mach, buys a new batch of spiders every three days, waking up at 5am to fry them before selling them at the intersection.

Two other large markets are the Chinese and Vietnamese who buy spiders for medicinal purposes. One seller, named Socheatta, has jars of rice wine containing whole scorpions and tarantulas.

Because tourists are usually more interested in taking photos than in eating the spiders, some sellers have begun to diversify.

“In Pub Street in Siem Reap, tourists don’t necessarily buy the spiders so [vendors] have a $1 a photo policy,” says Sreynoch.

Some of Skuon’s vendors also offer cooking classes and hunting expeditions, and prices are high.

One vendor’s most recent customer asked to film her cooking. She charged him $US50. Others have taken film teams and journalists out to find spiders, again for a fee.

But most of these expeditions are staged.

After years of heavy land clearance, there are almost no spiders left to hunt.

Much of this has been driven by the allocation of land, even protected forests, to large-scale agricultural plantations.

But it’s not just habitat loss that is driving the spiders to extinction. To meet demand, they are being drastically over-hunted and the industry is entirely unregulated.

Fewer locals in Skuon want to hunt for them now as they are unlikely to find any. 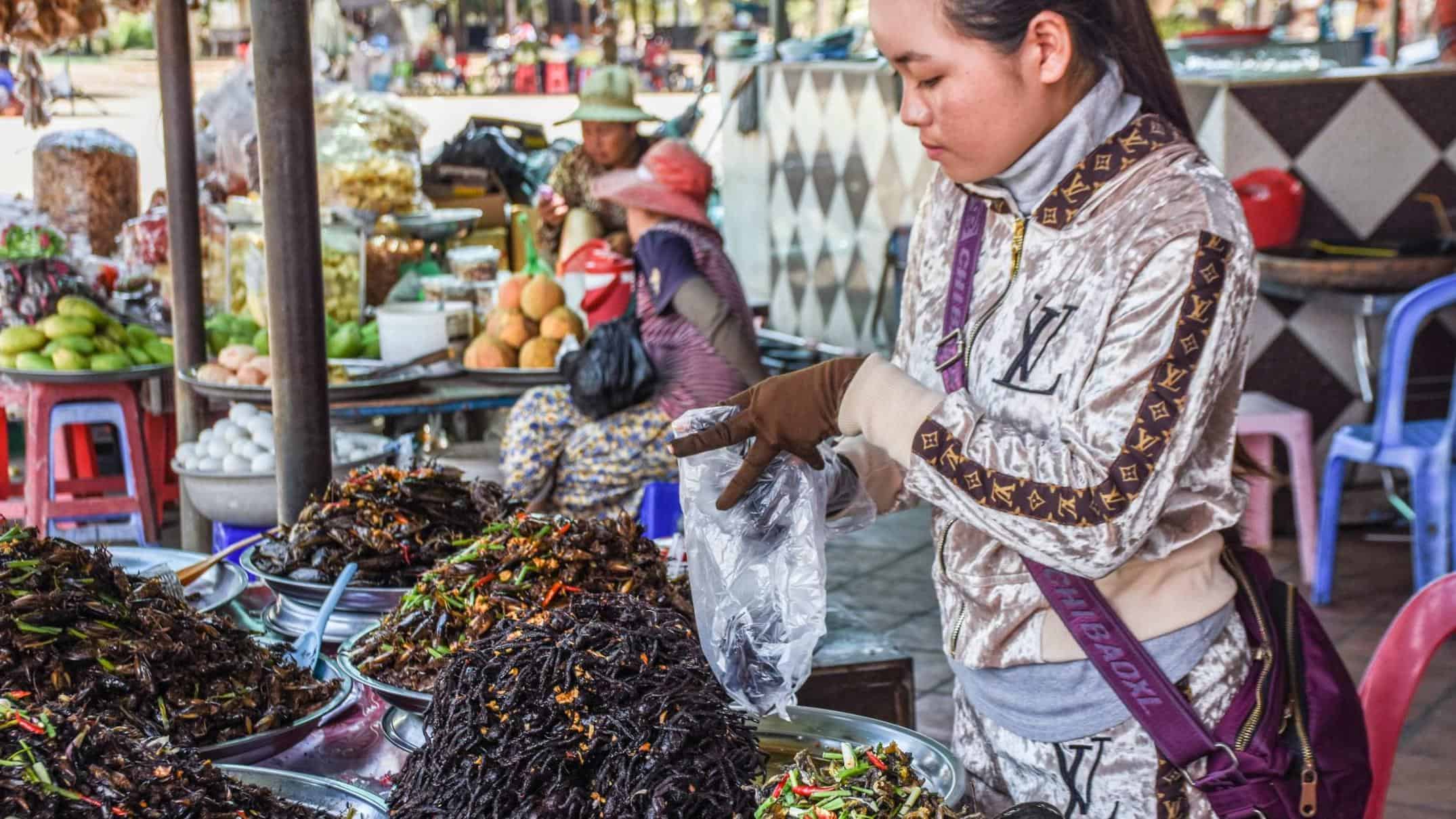 “There are factories here now and people would rather go there and earn a salary than work in the farm and forest,” says Ki.

“This whole town has changed … now they are outsourcing spider hunting to poorer villages in other provinces.”

Because the spiders are sourced from further away, prices have soared.

Mach has been a spider seller since she was a little girl, rushing up to buses with a plate full of tarantulas and selling them through the window.

She sells her spiders to passengers for 2-3,000 riel a head, the equivalent of several meals in Cambodia where the average annual household income is under $2,000.

Unless things change soon, this quintessential Cambodian delicacy could soon be just a memory.

But for Cambodians and foreigners alike, A-Ping continues to be a source of fascination.